The Tilghman Watermen’s Museum celebrates the work and culture of Tilghman’s Island watermen and their families. 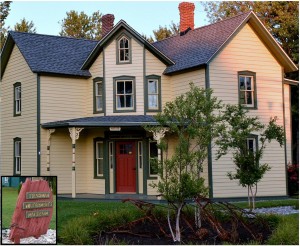 In 2007, a handful of Tilghman’s Island residents came together to try to preserve a historic workboat, the Kathryn. This singular idea soon expanded into the larger effort to record the ongoing story of Tilghman’s Island’s unique community, a community rich in history and with a culture centered on the work of watermen and their families. These early efforts lead to the birth of the Tilghman Watermen’s Museum.

The Museum opened in June 2008, in a small building that was once the island’s barber shop. Two barbers, Duckey Scharch and Johnny Moore worked at the drawers and mirrors still in place today. Johnny was also the island’s undertaker and kept a display of tombstones in the field across the street.

When TWM opened, the focus was primarily on capturing, on audio and video, the stories and experiences of the watermen before the old way of life on Tilghman disappeared. That effort produced an initial video, Growing up on TIlghman, recording the memories of eleven distinctive island residents who grew up in a place they considered “paradise.”

The Museum soon expanded into collecting art. Tilghman attracts artists. Not only do locals and “come heres,” people who have moved to the island, celebrate its history, natural beauty, and fascinating residents through art, but so do well known artists like John Barber and Marc Castelli.

Collecting boat models and other artifacts is an ongoing activity. The Museum is packed with examples of watermen’s tools past and present as well as explanations of their craft and the different techniques used in harvesting the Bay- pound netting, tonging, dredging, crabbing, etc. 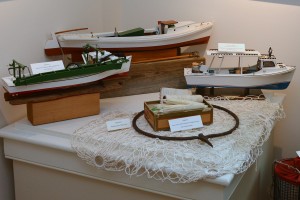 Current exhibitions focus on the art and artifacts of the island and boat models: a remarkable collection of original paintings and remarqued prints, and boat models by Bill Sommers, Vincent Haddaway, and others as well as historic photographs.